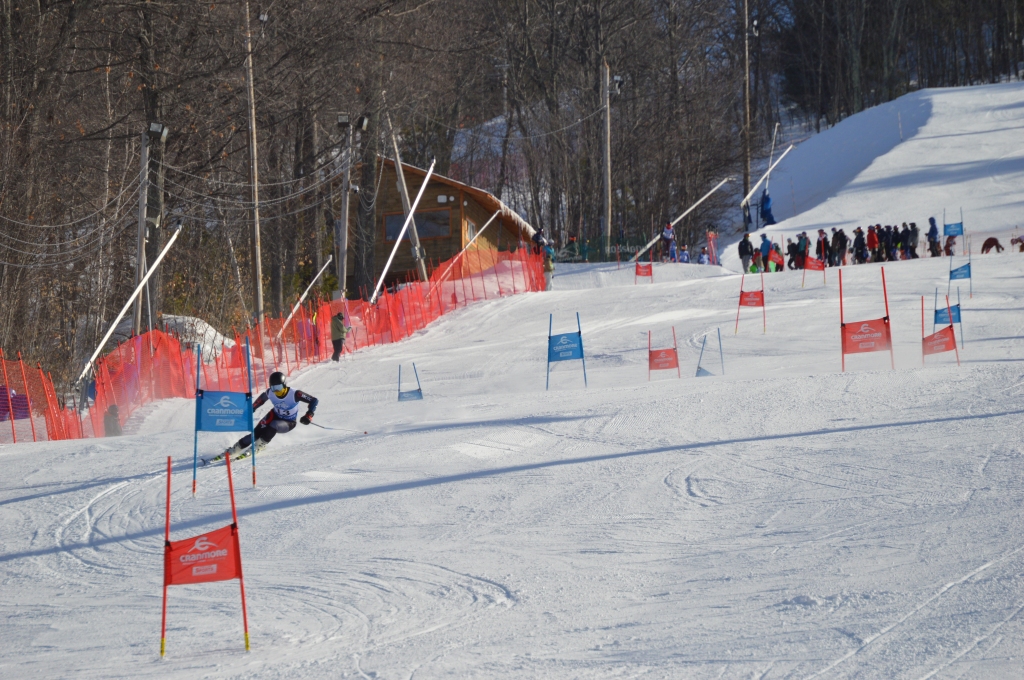 Going into the Division II states race, many of the racers on the Oyster River Ski Team hoped to have a good time, but for some it was an opportunity to continue their season. The boys had a successful day, and were able to apply all that they had trained for throughout a difficult season.

The team had a strong end to their season last Thursday at the Division II Boys States race at Cranmore Mountain in North Conway. The team faced tough competition, racing against teams such as Hollis Brookline, Hanover, Bow, Kennett, Goffstown, ConVal, Kingswood, Souhegan, Windham, and Pembroke.

Out of the eleven teams racing that day, Oyster River placed 5th overall. “The team had a great day.  The venue was great as well as the weather. The Giant Slalom (GS) course was pretty straight forward and the slalom was tight and quick making it a challenging course. This made for a great event and the boys all stepped up for the challenge,” said coach Daryn Gladstone.

Following the states race comes Meet of Champions (MOCs), in which the highest placing racers in the states races across all four New Hampshire divisions come together to compete to advance to Easterns. Typically, the top ten racers from both the Giant Slalom (GS), and Slalom races advance to MOCs, but this year in hopes to limit the number of people, only the top seven from each race advance. Oyster River’s Owen Mueller (‘21) will be the only boy advancing to MOCs this year along with Holly Reid (‘21).

Going into the race the boys had different goals, whether that be making it to MOCs, having a good time, or doing better then they did last year. “I wanted to race as best I could to qualify for MOCs,” said Mueller.

Nico Colarusso (’22) had a similar goal as Mueller. “I was definitely trying to make it to MOCs. I figured I made it last year why can’t I do it again,” he said.

But many of the other racers had different goals going into the race. “My main goal was to just have fun. I didn’t see myself stacking up very well against the other racers so I mostly just aimed to have fun at my last race of the season,” said Holden Bell (‘23).

States can be very stressful for many of the athletes hoping to make it to MOCs. While it was great to have solid results, it was also a great way to end the season. “Just being on the hill with everybody is very fun. Normally racing is very stressful for me, but everyone on the high school team definitely keeps me calm before my runs,” said Colarusso.

The States race consists of the top 6 racers from each Division II ski team across the state. These racers are chosen based on their performance at races throughout the season. These racers for Oyster River were Mueller (‘21), Nico (‘22), Ethan Wilson (‘21), Reed Larson Dennen (‘23), Bell (‘23), and Finn Henderson (‘24).

The morning of the race was very cold with temperatures in the teens. However, it was very sunny out and the snow conditions were great. There was a thin layer of soft snow on top of some very carveable ice, which got cleared off after the racers inspected the courses, making for some very fast and fun runs.

The first race was GS, which was set fairly straightforward on a trail with a consistent slope. It was important to maintain a high line in order to stay ahead and get a good time. “The GS course was set pretty straightforward but it really came down your weight over your actual skill,” said Mueller. Out of the 64 racers, the ORHS boys top placements for GS were Mueller who placed 17th, Colarusso who placed 23rd, and Wilson who placed 26th

After the GS race came the slalom race. The course was less straightforward than the GS course, and the gates were placed closely together making the transition from one gate to the next very difficult. On this course it was even more important to maintain a high line because of the quick turns needed to make each gate. This set made it easy to fall behind and slow down.

Many racers fell on a tight turn about halfway down the course, and unfortunately Colarusso slid out in this same spot, but was able to hike up and finish his run. “The slalom course was set at 10-11m radius and my skis are 12m radius so it was quite difficult. The course was fairly offset and was set deep in the fall line making it a more difficult course than usual,” said Colarusso. The top three placements for the boys in Slalom were Mueller who placed 7th, Wilson who placed 17th, and Colarusso who placed 21st.

The setup of the race was different than in past years. Typically, the start order is set up so that the top racers from each team run the course first. For example, the top Hanover racer would run first, then the top Kennett racer, then the top Oyster River racer, and so on. This year the states race was set up so that the teams were placed in cohorts to limit exposure to other teams.

States can be very stressful for many of the athletes all hoping to make it to MOCs. While it was great to have solid results, it was also a great way to end the season. “Just being on the hill with everybody is very fun. Normally racing is very stressful for me, but everyone on the high school team definitely keeps me calm before my runs,” said Colarusso.

Many on the Oyster River Ski team were very happy with how the season went. “I am more than thrilled on how our season turned out. We were lucky to have all of our planned events and practices. Our attendance was great and the athletes gave it their all every session we had. This season was also a great way for the kids to get outside, move their bodies and be with their peers, which was great for everyone,” said Gladstone.

MOCs will be held Thursday the 18th at Cannon’s Mittersill Mountain, and live results can be viewed here on the day of the race live timing.