Although the team didn’t win in the end, they had a great time playing. The game was bittersweet to many and the seniors reflected upon their hockey careers thus far.

Kaya has played hockey since he was in first grade. “My dad had always loved hockey, and would always have it playing on the TV. I was intrigued and looked up to the players I watched, and soon enough he came home with my own gear and I was off on the ice,” he said. One of his favorite hockey memories was beating their rival Spaulding last year on their senior night. Kaya hopes to play club hockey in college but says, “I will always continue to play hockey whether it’s a stick and puck session, a pond hockey game, or a men’s league game. I hope to coach my kids one day and give them the same opportunity I had.”

Dreher has played hockey for the past nine years. “I’ve always been primarily a forward but my youth coach always believed that a player should be able to play defense and forward so I would play defense when needed,” Dreher said. He was very happy with the fan turnout of the senior game, as it was the largest of the season. Dreher plans to play in a beer league after high school as he says, “I’ve played my fair share of competitive hockey.” 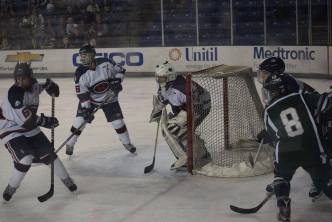 McNamara began playing hockey when he was five because he watched his brother play and thought it would be fun and has almost always played goalie. When asked about his favorite hockey memory McNamara said, “[it was] when I won the state championship when I was a peewee because it allowed me to go to nationals in California.” McNamara does not plan to play hockey in college and said, “I was kind of in shock at realizing how little time I have left in my hockey career.” He also noted the fans, like Dreher, saying that they provided a great atmosphere for the game.

Bishop has been out on the ice since he was two or three. He used to play defense on his youth teams but began playing left wing and now center in high school. The senior game was very surreal to Bishop and he said, “it still hasn’t hit me that I might never play another game [at the Whitt], but it was also super fun and all I have is good memories from it.” Depending on where Bishop goes to college, he may play club hockey but is not positive yet. 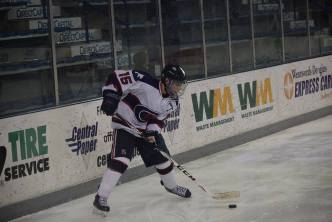 Thibault began playing hockey when he was six years old, the same year that his brother started playing. His favorite hockey memory was when the team beat Spaulding in the playoffs with an overtime goal last year. Playing at the Whitt for the last time was a strange feeling for Thibault. He said, “I remember standing on the goal line and saying to Michael, ‘this is weird’. Once the game started it was fine.” Participating in college hockey isn’t the most important thing for Thibault, but he may play for a club team. 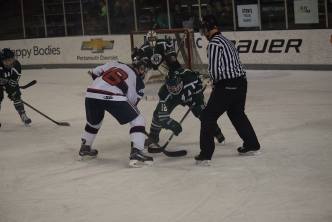 Later than most players, Donovan started playing hockey when he was ten. “I would go to all of my brother’s practices and finally I decided I might as well practice myself,” he said. Donovan has always been a versatile player, playing wherever the team needs him; currently he has been playing center. Donovan was out for a large portion of time due to an injury this season but returned to the ice this week. 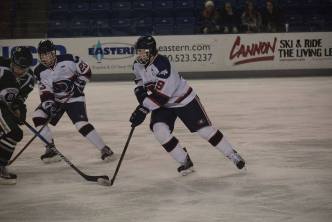 O’Connell has played hockey for about eleven years. He said, “I think I started because my friends had been playing for a few years before that and it looked pretty fun so I thought I’d give it a try.” He has tried every position from wing, to center, to defense, and even goalie. O’Connell says, “to be honest [senior night] hasn’t sunk in yet, but the atmosphere at the game was great we had unreal fan support. I’ve never seen that many people come to one of our games.” He plans to try and play for a club hockey team in college or a men’s league in the future.