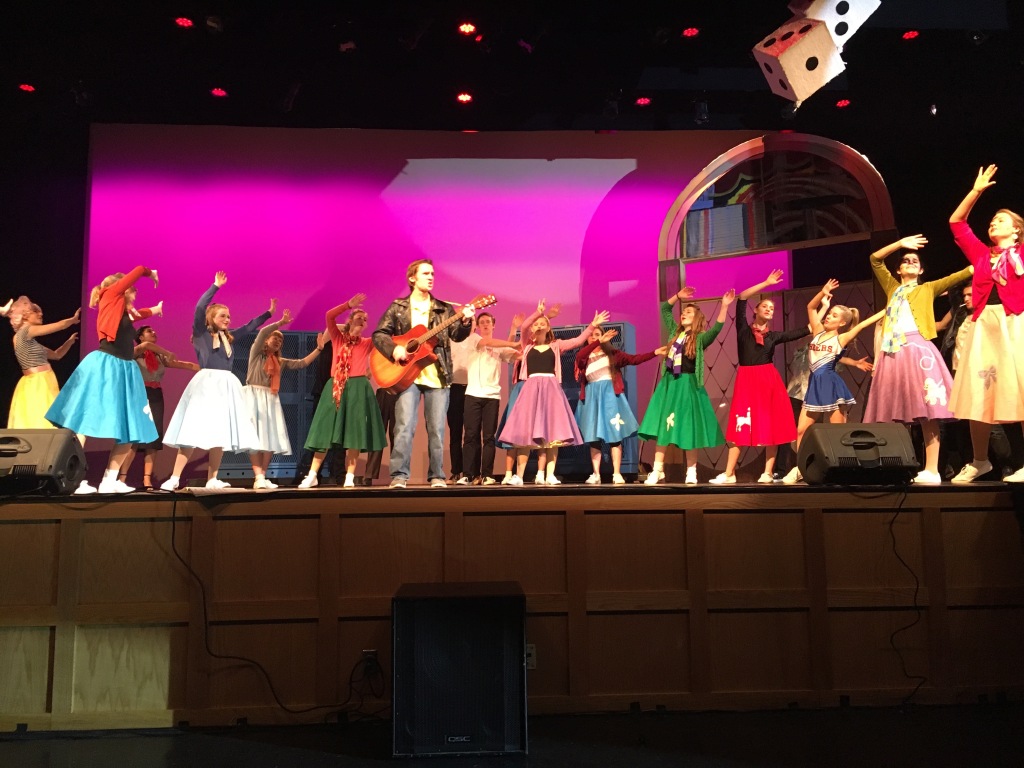 Get ready to transport yourself to a time of leather jackets and poodle skirts. Join Oyster River High School as they travel back in time to Rydell High in 1959. Grease is the word!

A classic and a favorite, Oyster River’s Spring musical this year is Grease. Written by Jim Jacobs and Warren Casey, Grease is a 1971 musical set in 1959 at a fictional high school by the name of Rydell. Centering around a romance between Sandy, played by Grace Henry (‘19), and Danny, played by Ian Miles (‘19), watch as a group of kids confront the challenges of romance, reputation, and Rydell High friendships.

After being talked into the musical by not only her musical director but her choreographer and her seniors as well, Director Meredith Freeman-Caple, chose Grease after many years of hesitation. “It’s really fun music, but the script is weak,” she said, explaining why she has not wanted to direct the show before. Caple remarked that there are many things to consider when choosing a musical, and commented on other reasons as to why Grease was difficult to choose.

“You have to get the royalties (permission) and that can be somewhat of a hassle or a wait. And they’re quite expensive,” she said, adding, “this one was extremely expensive.” However, after talking to her co-workers and deciding that she had the right talent this year to pull off a musical like Grease, Caple allowed herself to be talked into it, although perhaps for a more sentimental reason.

“I met my husband doing Grease in Minneapolis. He played Danny Zuko and I played Rizzo, so it’s kind of full circle,” she said smiling.

The excitement and popularity of Grease has rocked the theatre department at Oyster River, drawing in not only a lot of new talent, but young talent too.

“Grease is one of my favorite shows ever,” said Sophia Testa (‘21), playing the part of Betty Rizzo. “I was so excited to learn that it was going to be the musical. It was going to be my first time auditioning at Oyster River since I’m a freshman, and I [would have been] happy to get an ensemble part,” said Testa humbly. “I tried really hard and practiced really hard, and I ended up getting the part, and I was just shocked.” Testa has been doing theatre for five years, previously working in shows at the Rochester Opera House and the Seacoast Rep. “I love it; I love theatre. It’s everything I want to do,” she said. 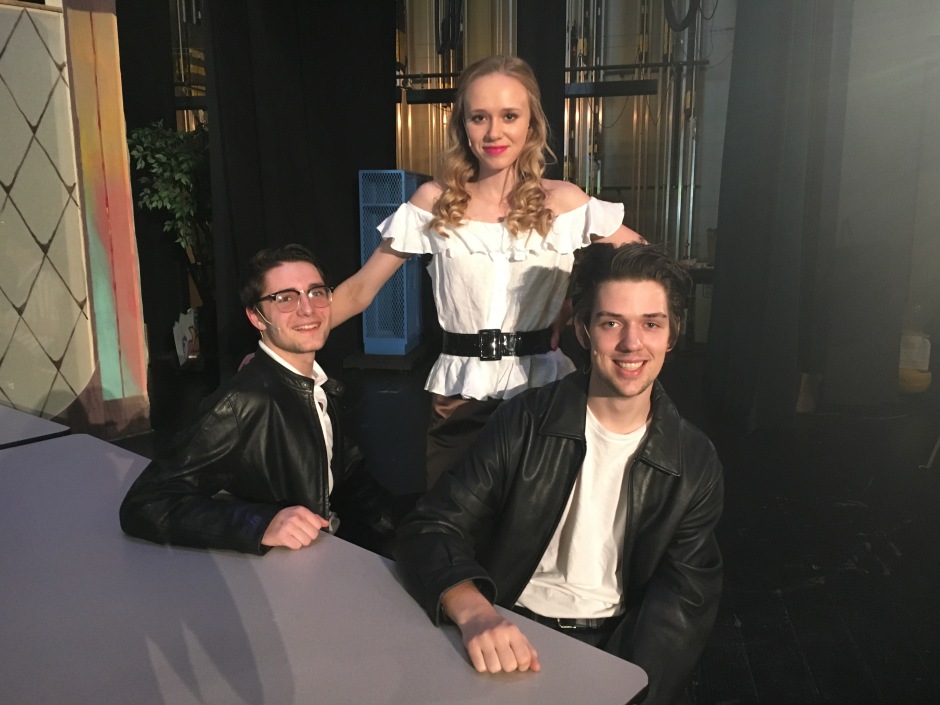 For new actors in the show, the transition from no acting experience to Grease has been a challenging one. “It’s a lot of speaking, and a lot of lines,” said Rhys Webb (‘19), who plays one of the Burger Place Boys, Roger. Webb mentioned the challenges he has faced as a new member of the theatre department. “Since I’ve never done any sort of theatre thing ever before it’s just difficult to learn [things like] ‘don’t be facing away from the audience, project your voice,’ everything like that. Just the different little rules of theatre that you need to know,” he said.

But despite these challenges, Webb has persevered, remarking on the things that have been going well so far.

“The musical aspect of it [has been going well]. I think the songs fit my voice really well, and I enjoy them so that’s the important thing,” he said, “I don’t think I could have gotten a better one for myself.”

While the actors are a huge part of Grease, the show would not happen without the tech and stage crew.

“Tech for the show is very complicated but we’ve made [an effort] to work with it. There’s a lot of sets, a lot of different elements that need to go together at the same time, but I have great helpers and it’s coming along,” said Emma Kovalcik, the theatre department’s assistant stage manager.

Testa ended us on a positive note saying, “My hopes are that [the audience] is going to have as much fun as we do.”

Grease opens tonight, Thursday, May 24th, at 7:00pm and will run at the same time Friday and Saturday along with a 2:00pm matinee on Sunday, May 27th. Admission is $5 for students and $7 for the general public. 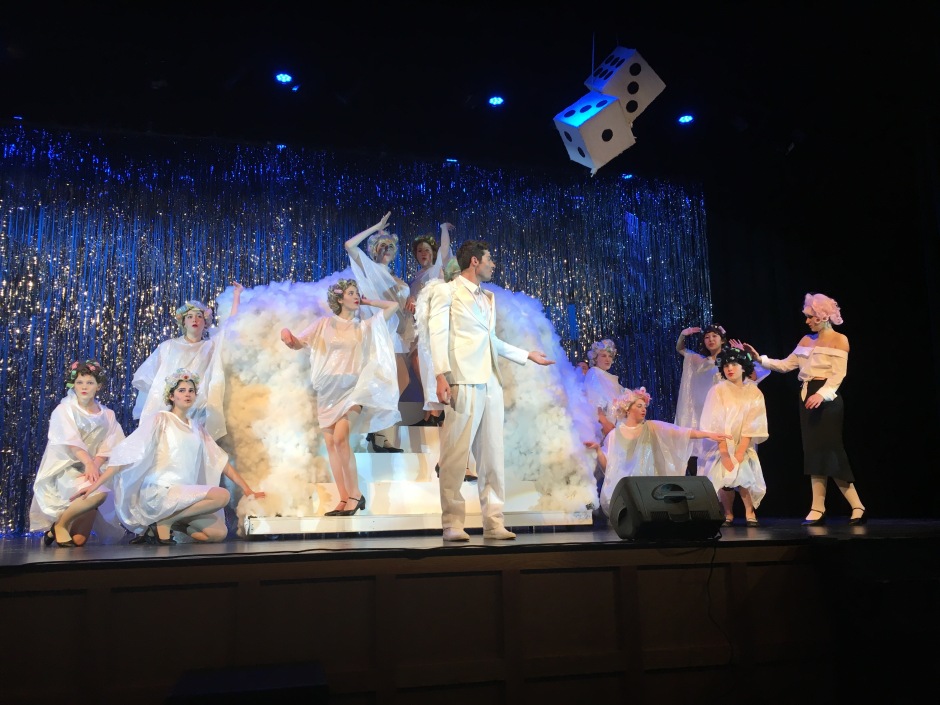