Some of Oyster River’s most talented individuals can be found hidden away within the art room. This group of students is often kept out of the magazine’s spotlight, though many of their works have appeared numerous times. Read on to learn more about two talented artists right here at ORHS! Make sure to check out Issue 4 of our print magazine to see features on two more artists! 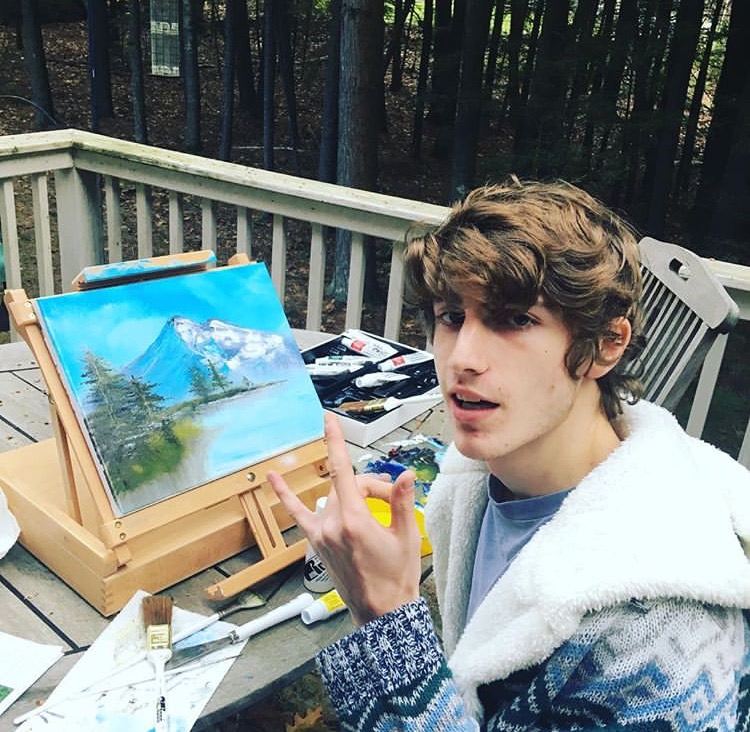 “I feel like I’ve always been pretty artistic. I’ve always been a doodler, like when I’m doing my homework and stuff. But I never really pursued more professional stuff until a couple of years ago when my mom bought me a couple of canvases and oil paints for Christmas. I just kinda went at it. The first thing I painted was a picture of myself, and it actually turned out pretty good. My parents were like: ‘you have to keep doing this,’ so they kept buying me more sh*t, and it kinda took off from there. The more I did it, the more into it I got,” says Phofolos.

For years, Phofolos kept his art skills strictly to himself. The support from his parents allowed him to really pursue his passions. Today, he has been putting his art up on his social media and has even started to sell some pieces.

Since his parents bought him the oil paints for Christmas, they have been Phofolos’s favorite type of art  has been oil paints. “I like painting the most, and oils are the highest quality kind of paint. They’re also really expensive, so I try to appreciate the stuff I have. Most of the time, I end up doing pencil or pen, just because it’s handy.” The medium Phofolos uses depends largely on the subject of his work. “I draw a lot of portraits. I draw pictures of myself. I draw pictures of other people. I also love landscapes, if I’m painting. With oil paints, I love to draw pictures of mountains, and water, too. I try and incorporate water and reflections into a lot of things I do.”

Although his social media has increased the popularity of his art, Phofolos wants to grow his audience even more. “I have been trying to sell my work. I’ve sold a couple just to my friends. I know a lot of people have Etsy shops and things like that, and I’ve been thinking about that a lot. But [for right now] I just sell portraits and stuff to my friends.”

Even before Phofolos realized he had real talent for art, he drew strictly as a stress reliever. Art was a way for him to reset his brain and take a break from whatever was stressing him out. “It’s relaxing. It’s unwinding. You can listen to music, you can do your homework, while doing art all at the same time. Sometimes I’ll be writing a paper and take a break to go finish up a painting, or clean up a piece I’ve been working on for a while. It refreshes your brain a little bit.”

Being a junior, Phofolos is not sure about his future yet, but he has seriously been thinking about attending art school to better his skills for the professional world, “but even if that doesn’t work out, I’d still like to have [art] as a good way to wind down and relax. I like to paint before I go to bed a lot. I always want to have art as at least a hobby,” he added.

Phofolos looks to art and artists who have very unique styles, specifically surrealism. “I’m inspired by surrealist artists like Salvador Dali and Vladimir Kush because they don’t tie themselves down to anything too real and let their creative really shine.” He finished with talking about his own style: “as an artist, I like to experiment a lot with new techniques and mediums, so I feel like I don’t have a specific style. Everything I create I try and take a new angle to it.”

“I first got into art when I was camping and I didn’t know how to read yet, and I saw a duck. I really wanted to draw the duck. My mom still has that drawing. Drawing was a lot easier for me than writing,” said Croot, a senior involved with art in and outside of school. She continued saying, “as a kid, I had a lot of learning problems with reading and writing, but drawing made sense to me. So, I continued with that. Instead of writing sentences, I would draw pictures.”

As she mentioned, Croot has been an artist since she could hold a pencil. Her art has been featured in MOR in the past. In issue 3, she drew the art for the #metoo article. Similar to Phofolos, Croot’s favorite medium is oil paintings. “My style is very organic,” she explained. “It’s very real and very natural. I don’t really go much into abstract, but sometimes a little expressive. I do a lot of it through mountains and natural settings, not make believe things.” Like the other artists mentioned, Croot often finds herself doodling all over her notes during class. Art is a good distraction when she gets stressed or overwhelmed.

Being a senior, Croot has been thinking about her future a lot lately, more than the juniors mentioned earlier. Knowing she wanted to do art as a career, Croot has chosen to major in graphic design at college. (Check out Anna Kate Munsey’s article on college commits, which features Croot as an athlete.) Croot is hoping this major will allow her to always be an artist and keep art as a frequent activity in her life, while also giving her many career paths.

At the high school, Croot has spent a large majority of her time in the art room. “I’ve taken Intro to Art, Drawing and Painting 1 and 2, Pottery 1 and 2, Advanced Art, and Senior Studio. That’s basically everything, besides art history.” Croot loves art because “there is no wrong way to do art. No one can tell me it’s wrong. I hate being told wrong, so no one can tell me that.”

Croot finished by talking about who has been her biggest inspiration as an artist. “I look at all artists as inspirations because everyone sees the world in a different way, and however they express something as simple as a mug, everyone sees it differently. [I love] seeing everyone’s take on things,” she explained. “An art inspiration is definitely Mr. Lawrence because he allows me to make art and doesn’t criticize it at all.”

Of course there are so many more artists at ORHS than these students, and the two others mentioned in issue 4 of our print magazine, but this was just a look into what wonderful, creative people we have right here in our community. If you’re interested to learn more about these artists, follow them on Instagram!