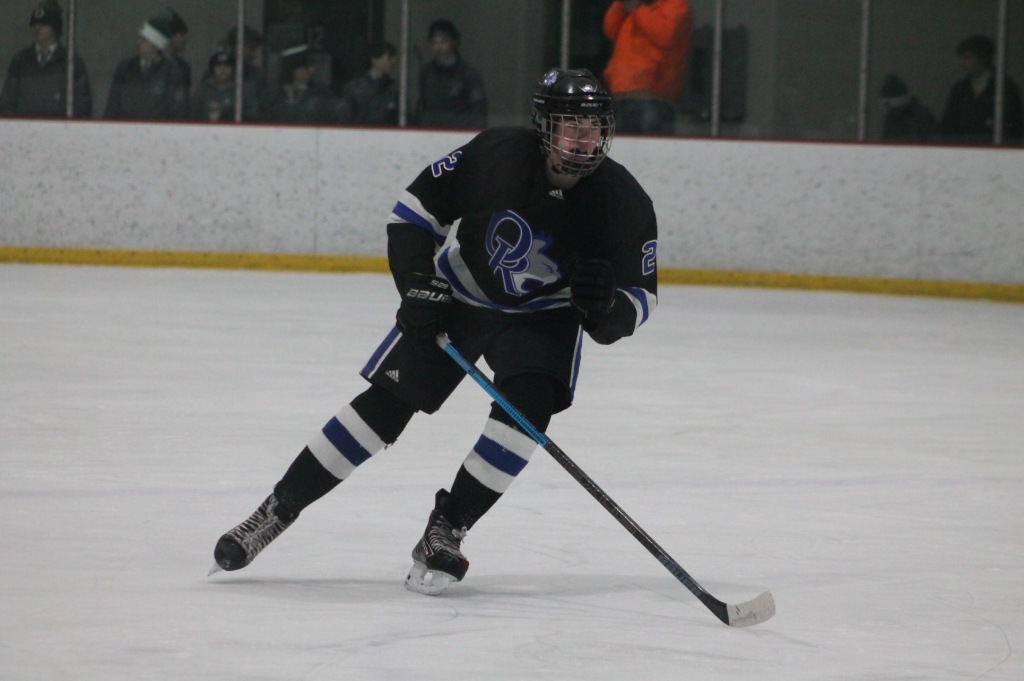 Oyster River and Goffstown were deadlocked at zero, late in the second period of their quarterfinal match. Liam Spurling (‘20) picked off a Goffstown pass in the Oyster River zone, and skated down the wing. He banked the puck off the boards to himself, to get around a defender. Spurling’s shot deflected off the Goffstown goalie, and into the back of the net. Oyster River grabbed the lead, and never looked back.

The Oyster River boys hockey team took down the Goffstown Grizzlies 4-0 on Saturday night, in the quarterfinals of the NHIAA Division 2 Boys Hockey Playoffs. Spurling’s late second period goal seized momentum, and was the start of a big night for Oyster River.

Oyster River came in to the playoffs as the #5 seed in the DII tournament, and Goffstown was the #4 seed. The only difference in their regular season records was an early season tie between Oyster River and Somersworth, that ended up giving Goffstown home ice. The two teams met twice in the regular season, splitting the two meetings with one win each, both 3-2 finishes. “Even though we lost to them during the regular season, we felt like we outplayed them in both games,” said co-captain Declan Daubney (‘20). “We knew our game plan would work.”

The game opened up just as tight as the two regular season bouts. The first period didn’t feature any scoring for either side. Despite that, it was still an action-packed 15 minutes. The two sides traded opportunities throughout the period, with Oyster River’s Claden Daubney (‘22) and Goffstown’s James Amorelli (‘22) making big saves.

Late in the first period, Oyster River had a couple of big chances. First Jack Poitras (‘22) rang a shot off of the post, and then later Poitras stole the puck, got it to Alden Swiesz (‘21), who missed just high.

For much of the second period, it looked like a carbon copy of the first, with both sides seeming equally matched, and nobody capitalizing for any goals. “We almost started to get nervous,” said Spurling. “We had expected to be up by then, and we hadn’t gotten as many chances as we got in the first, so the mood was definitely tense.”

That all changed in the final two minutes of the second, when Spurling rushed down the wing, passed it to himself off of the boards and buried the game’s first goal, with 2:15 to go. “As a senior in possibly my last ever game, after playing for almost 10 years, scoring the go-ahead goal was an amazing feeling,” said Spurling.

Just 30 seconds later, Oyster River found the net again. Andy Carlson (‘22) made a tremendous pass to Poitras through traffic. Poitras impressively reeled it out of his skates, and put the puck past Amorelli. “It was a great pass because the only lane to my stick was behind me, and he knew where to pass it,” said Poitras.

In the third period Goffstown got opportunities, while Oyster River was playing with a much more conservative approach than they had earlier in the game. But with every Goffstown chance, came a save from Daubney, who was solid in net the entire evening.

One of his biggest saves of the game came while Oyster River was on the power play. Oyster River turned it over near the net to one of Goffstown’s top players, Colby Gamache (‘20). He had a great chance from just a few feet away, but Daubney made the stop. Daubney wound up with a 28 save shutout. “He was huge,” said Spurling. “He made some big saves that gave us a chance to win.”

Oyster River sealed the first round victory in the final minutes, when Goffstown pulled their goalie to gain an extra skater. Almost immediately, Eric Donovan (‘20) gained possession and hit the empty net from deep in the Bobcats’ own end of the ice. Poitras scored his second goal of the game, on another empty netter off of a feed from Swiesz, in the final ten seconds of the game, making it 4-0.

Oyster River’s defense was solid all evening long. “We did a good job of slowing down their transition game and clogging up to the neutral zone, which is where they build up a lot of speed,” said Daubney.

Many of Oyster River’s loyal supporters made the hour trip to St. Anselm College for the game, and made a difference with their energy. “The atmosphere was something else,” said Ben Robar (‘21). “I think there were only around 30-40 of us students, but it was electric.”

Oyster River will advance to the semifinals, Wednesday (3/11) to face top-seeded Keene, who they beat 4-3 earlier in the season. “If we play the system that our coaches lay out for us, then I would say nobody in the state can beat us,” said Poitras.